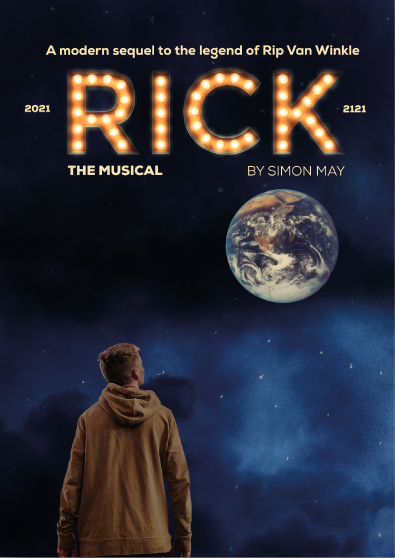 ‘Rick!’ is a musical inspired by the original legend of Rip Van Winkle, written and composed by Simon May.

When a young Aspergers boy is transported in his dreams to the future, he discovers a new found self belief and learns how to deal with his past challenges.

After another traumatic day at school, 12 year old Rick closes his eyes and falls sleep … for 100 years. He wakes up in the 22nd century as the oldest boy in the world. It is not long before Rick, the stranger from the previous century, becomes a global megastar. Being the only human who has retained the ability to dream, can he avoid being exploited for his unique mind and rise to face his present-day challenges?

Song 3: How Do You Dream

Song 3: How Do You Dream

Song 4: Welcome To The New World

Song 4: Welcome To The New World

Song 8: Laugh In The Rain

Song 8: Laugh In The Rain

Song 9: Someone To Be Proud Of

Song 9: Someone To Be Proud Of

Song 12 Too Many Fingers In Too Many Pies

Song 12 Too Many Fingers In Too Many Pies

‘Rick Van Winkel!’ is a musical inspired by the original legend of Rip Van Winkle.

Rick is an 10-13 year old boy with Asperger high functioning autism, who doesn’t like school. His drama teacher Mr. Jones has given him the lead part in the school end of term play, in the hope of encouraging him to like school – by doing something he can enjoy.

Rick’s two spiteful cousins Josephine and Georgina are also in the cast and during the dress rehearsal they wind Rick up … in a typical outburst of anger he quits the stage and runs home, leaving Mr. Jones without his lead actor in this crucial final rehearsal.

At home Rick rushes past his despairing parents and locks himself in his bedroom. As he stays in bed, he goes into a deep sleep, ………for a hundred years. Whilst the final run through of “Rip Van Winkle” is being performed at school with Rick’s brother standing in as the lead, he wakes up in a hundred years time to meet his new family (“Mum”, “ Dad”, his “great great nephew”, and his “parallel girlfriend”) and experience life in a new world.

Mr. Jones’s great great grandson is Newton Jones, the star Teacher on the Global Edutainment Channel, who introduces Rick to the 22nd Century.

Meanwhile his two distant cousins (who are now global PR agents and parallel characters to Rick’s real cousins in the present day) see Rick as a freak, who can be exploited for commercial gain. Rick is unique. Not only is he the oldest boy in the world, but he is the only human who has retained the ability to dream.

After receiving worldwide acclaim as the stranger from the previous century, Rick eventually tires of this, and resents being used by his two cousins. When he refuses to collaborate with their scheme to make a fortune by uploading his “dream” app to a gullible global TV Audience, they imprison him during the commercial break, and are about to kill him off and sell his priceless iconic brain, when Newton Jones intervenes and turns the tables on the two wicked cousins, by exposing their “Rip Off” scheme.

Back in the present day, Rick finally wakes up from his dream experience. Having enjoyed being a global superstar, he has discovered a new confidence and higher self-esteem, which he wants to share with his family and friends. He gets up quickly, and is just in time to play the lead role in the first night performance of “Rip Van Winkle”.

‘Rick!’ is the story of an under-achiever who learns in an exciting and entertaining dream that he isn’t actually one of the bad guys. In his dream he did the right thing, and stuck to his principles by not taking the easy path. His individuality and unwillingness to conform are his strengths. He is a boy with vivid imagination – someone who can look into the future and be ahead of his time.